The Gantz Farm, better known today as the Gardens at Gantz, had been the home of the Gantz family since the 1830s. They were among the earliest settlers in Jackson Township.

Today, a portion of that original farm is a city park located on Home Road. The house is not open to the public but the gardens and surrounding recreational area is open during daylight hours. The gardens feature herbs that would have been used in a pioneer farmhouse in the mid-1800s.

The Gantz family purchased land in Jackson Township in 1817, just 13 years after the area was first settled by the Grant family in 1804. The Gantz family became very successful farmers and land owners. The first survey of the farm was completed in 1810 by William Washington.1

The Gantz family name may only date to the very early 1800s, according to extensive family research completed by George Gantz.

In his history, Gantz, A Family History,2 he recalls that six generations of family members were told the family name in German meant ‘goose’ and that it might have been originally spelled Gantzert which meant ‘goose herder’.

There were numerous other possible spellings of the name but the name Goos, as recorded on a passenger list from Rotterdam to Portsmouth to Philadelphia in 1749, may be more closely related to the family.

The Gantz family name first appears in Franklin County in 1817 when Andrew (Goose) Gantz purchased 200 acres from Joseph Foos for $1,000. The original parcel was located just east of Broadway and south of Home Road. His land extended east to Hoover Road.

Andrew and his family were living in Washington County, Pennsylvania at the time he purchased land in Ohio. No member of the Gantz family is known to have lived on the Franklin County land until after 1830.

The Gantz family member most recognized in Jackson Township history is Adam Gantz. He was born May 10, 1805, the fourth child and oldest son of eight children. Adam was only 12 when his father, Andrew, completed a land speculation purchase of 200 acres in Franklin County.

Adam had left Pennsylvania and was living with a sister, Salome Gantz Harsh in Carroll County, according to an 1830 census. Adam was 25 at the time. In the fall of 1830, Adam married 16 year old Catherine Pennix. It’s not clear where they first lived because Adam didn’t purchase the 100 acres east of his father’s land until June 25, 1832.

A portion of that ground today is known as the Gardens at Gantz Farm.

Adam got a bargain when he purchased his land. He only paid $7.50 for the acreage which calculates to seven and a half cents per acre. It was on this land the brick Gantz farmhouse was built. Today, visitors to the farmhouse, after close examination, can see black marks on the brick where they were burned in the kiln.3

While most people settled near rivers and streams, Adam purchased higher ground to avoid the swampy land near the rivers, were victims of diseases often blamed on mosquitoes.

Family history suggests Adam and Catherine first lived in a primitive lean-to type dwelling when they moved to Franklin County sometime after 1832. Speculation would indicate the temporary dwelling was near a spring and north of the current Independence Way.

The area was known as Wolf Ridge because of the numerous animals in the area. When Adam was away, Catherine became so afraid that she traded a cow for a shotgun for protection.

Adam spent his life as a farmer growing corn and wheat. In the 10 years after 1830, Franklin County was one of Ohio’s top grain crop counties. When he started farming, Adam owned two horses and one cow. With an Ohio-Erie Canal feeder canal operating at Shadeville, local farmers saw significant increases in farm prices.

As his farming became more profitable, Adam became involved in more ventures including construction of the Columbus and Harrisburg Turnpike. The company, incorporated in 1847, built the toll road in just two years opening in 1849. Adam was one of the five directors for the new road that cost investors $35,602.

As the children of Adam and Catherine became adults, Adam made acreage available to each of the children.

The Adam Gantz family was also instrumental in promoting English speaking services at St. John’s Lutheran Church. The English portion of the congregation eventually formed the Presbyterian Church of which the Gantz family were members. 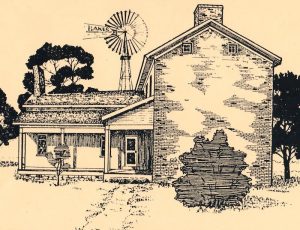 Earl R. Nicholson did considerable research on the Gantz farmhouse. An activist and local historian, Nicholson had talents as an artist4 and writer. His work is captured in this part of the Gantz story.

The sketch at the right is how Nicholson thought the side view of the farmhouse might have looked shortly after the Adam Gantz family moved into their new home.

The brick home was constructed with timbers felled on the property. Bricks were hand-made with clay and sand. Wet clay was then poured into wood molds.

Nicholson said there is strong evidence the Gantz brick were actually placed in a kiln that removed moisture and hardened the brick. From the mold, bricks were generally laid out on dry ground to dry. If a brick had too much moisture content, it would explode inside the kiln. The brick was fired for several days and then brick was allowed to cool several more before they could be used.

The pattern the bricks form or the bonding system used in the farmhouse is called the American Common Bond, Nicholson explained. “With this bonding system, the headers (ends of the bricks) appear every 5, 6, 7 or 8 courses. The walls in the house are 13 inches thick.

Nicholson explained the evidence that a kiln was used on the Gantz property can be seen in existing brick.

“If you look closely at the walls of the Gants farm home, you will see bricks whose ends are black. Some of these ends are glazed also,” He explained. “These are the bricks there were closest to the fire and received the highest heat.” 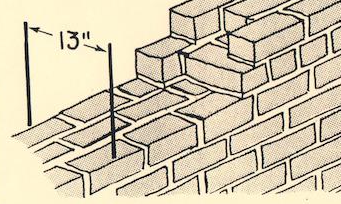 Logs used in construction were hand hewn. This was a process where bark was

removed and the rounded tree was squared into flat surfaces. This was accomplished by hand using an axe. This was difficult and very hard work. The timber was used for beams and framing in the house.

Interior walls for most homes at that time were plastered and three coats of plaster was often required for a smooth surface. The work took a long time and was labor intensive. Nicholson believes the plaster formula in the Gantz house included lime, animal hair and sand. He also believed the plaster walls were most likely whitewashed. 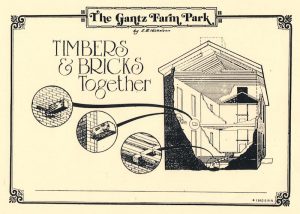 The Farmhouse and Gardens

There was a time in the 1980s when the fate of the Gantz farmhouse was in question. Money was a big issue and the City of Grove City was faced with a relatively huge restoration project and very little money to see such a massive project through.

The property remained in the Gantz family and Blodwen Jones Gantz was the last of the family to occupy the farmhouse. When her husband died, she mortgaged the property to John A. Miller. Upon Blodwen’s death in 1973, Miller transferred 9.712 acres to the City of Grove City with the provision that it be kept and maintained as a public park.

At one point, there was discussion the best move would be to tear down the brick house at the new park. Karen Gunderman, who was then head of the Grove City History Department, was a strong proponent for restoration.

Major expenses that had to have answers included the need for a new roof and restoration for some of the exterior brick at the farmhouse. Funding for the project was not available from the city at the time. Fortunately, the project would move ahead over a period of years. By the 1990s, restoration of the house had been completed and another phase of the project was underway. In 1988, under the guidance of Dr. Jim Utzinger, an herb garden was incorporated into the overall park project.

The garden was to be Grove City’s showcase involvement in Ameriflora ‘92, an international flower and garden show planned at Franklin Park in downtown Columbus.

Barbara Williams, of the Ohio State University Department of Horticulture, was hired to design the herb garden in 1989. In 1991 she became coordinator of the Gardens at Gantz Farm, a position she held for 14 years before retiring in 2003.

Utzinger, a professor of horticulture at OSU, was chair of the Herb Garden Steering Committee. Unfortunately, he never saw the project through to completion; he died in March, 1990.

Barry Babbert, director of the Grove City Parks and Recreation Department became a driving force and continued to move the project forward.

Babbert worked with State Senator Eugene Watts to secure a $150,000 grant from the State Capital Improvements Fund. Overall, the herb garden investment at the park was just over $200,000. 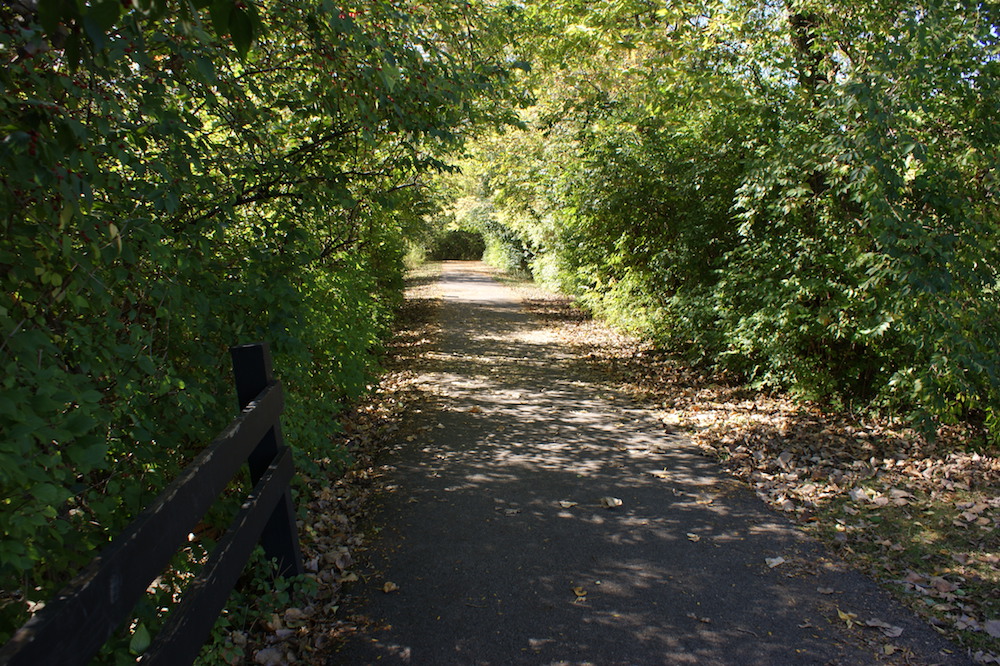 There were many active participants in creation of Gantz Park and the gardens, far too many people to mention here. It could easily be described as a community effort of monumental proportion.

The effort paid off and Grove City was designated as a Host Community for Ameriflora ’92 The Gardens at Gantz Farm were dedicated July 6, 1991.

The gardens at the time, as they still remain today, included the Garden of Yesterday that included a kitchen garden with heirloom vegetables and old fruit varieties; the Garden of Today featuring theme gardens including culinary, fragrance, dye, medicinal herbs, a knot and taxonomic garden.

Finally, the Garden of Tomorrow demonstrates landscaping with herbs and growing herb containers where plants can be harvested in bulk for teaching purposes.

The Gardens at Gantz was described as a major asset to the city, a new educational resource and a living place of beauty. 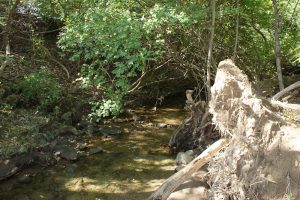 Marsh Run at the Park

Today, oversight of the Gardens at Gantz Park is handled by the Volunteers at Gantz Farm and Grove City Parks and Recreation. The gardens include approximately a quarter of an acre of the 9.7 acres that encompass the park.

The three gardens have become a real-world laboratory and an educational resource for many individuals and groups. The Volunteers at Gantz Farm host workshops, an annual herb sale and other gardening related activities.

The park land surrounding the farmhouse also offers a variety of activities including an arboretum, hiking trails, tennis courts, picnic areas, a shelter house and a bridge over meandering stream, better known as Grant’s Run.

In 2010, the City of Grove City incorporated a labyrinth at Gantz Park, an ancient meditation tool, that has been used throughout the world for more than 4,000 years. 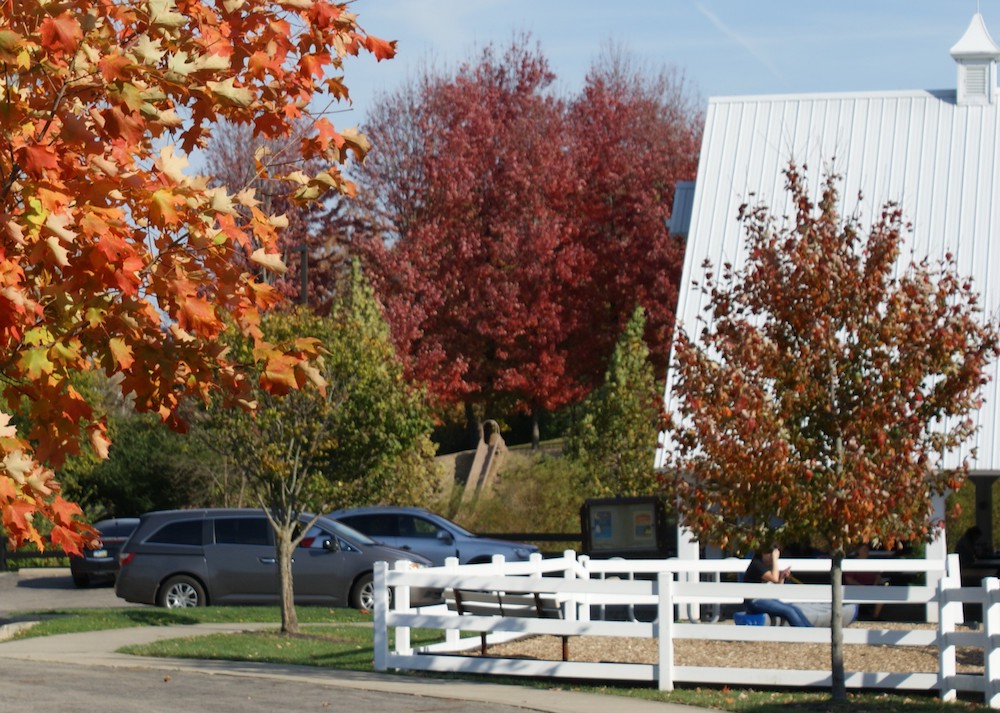 Unlike a maze, the circular paths have one entrance point that lead to its center with no dead-ends. The Gantz labyrinth is surrounded by an herbal grove including American Beech, Sweet Bay Magnolia and Sassafras.

Walking the labyrinth represents a journey to one’s spiritual center and then back into the world. There is no right or wrong way to walk a labyrinth’s path.

That same year, a rain garden was put in place to catch runoff from the garage and parking lot. Deep rooted and drought tolerant plants filter storm water through their roots so ground water is cleaner as it enters the local stream.