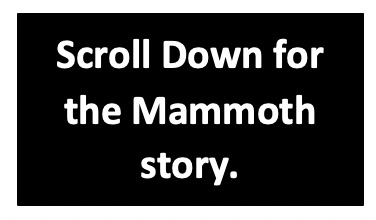 In 1952, Mr. and Mrs. Ernest Good, two Grove City amateur archaeologists, made discoveries in the Stringtown Road area that have been dated to the prehistoric Late Archaic Age, according to Brad Lepper, archeology curator at the Ohio History Connection.

Mr. and Mrs. Good, who made their home on Civic Drive, had developed a keen ability to identify more recent Indian artifacts and relics from the 1700s and 1800s.

During their married life, they uncovered thousands of items including an assortment of tomahawks, clubs, arrowheads and war clubs from more recent tribal activity from the Shawnee villages in the area.  They also once participated in an archaeology dig in a Kentucky cave. 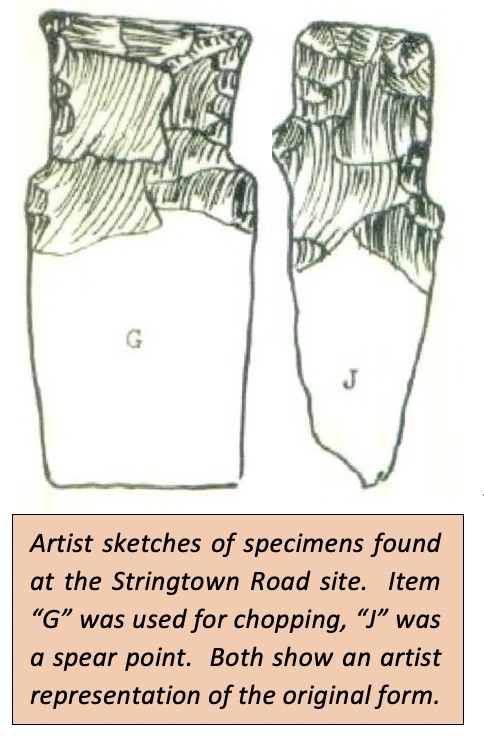 But their most significant and ancient discovery came while searching a 40-acre site off the north side of Stringtown Road at State Route 104.  The land is now occupied by the Ohio Auto Auction.  A small stream once ran through that area and emptied into the Scioto River.

People lived in that area from 3,000 to 8,000 years ago.  They were ancient American Indians whose ancestors crossed a land bridge that once connected the American continent and Asia.

The earliest people known to have lived in Central Ohio were the Paleoindians who arrived between 9,500 B.C. and 8,000 B.C.  That group, identified as the Clovis culture, lived in groups of 20-50 nomadic people.  They were hunter gatherers who followed wild game as their primary food source.  Mr. and Mrs. Good’s discovery in Stringtown Road area were originally believed to have been from the Paleoindian time period but is now considered to be from the Late Archaic Period.

People in the Archaic Period were still hunters but they also consumed plants, nuts and berries.  Some were known to live in small communities and practiced basic gardening techniques.  Archaic people hunted white-tailed deer, elk, bear, beaver, wild turkey, and other small critters.

In the 1890s, a Mastodon tusk was uncovered in a clay pit near the old brick and tile factory once located near St. John’s Lutheran Church.  The shape of the tusks helped identify the animal.  Nearly 100 local residents went to the site, probably after Sunday church services, to be included in a historic photograph.  Could that be evidence of an early Paleoindian hunt in the Grove City area?

The Ohio History Connection has acknowledged it has a collection of artifacts donated by Mr. and Mrs. Good.  The collection was donated over a series of years between 1956 and 1963.  Some of their items included artifacts from Watt’s Cave in Christian County, Kentucky.

Donated items included animal bones, ancient tools, Delaware chert and objects made from granite.  Many of these came from their exploration in the Stringtown Road area. 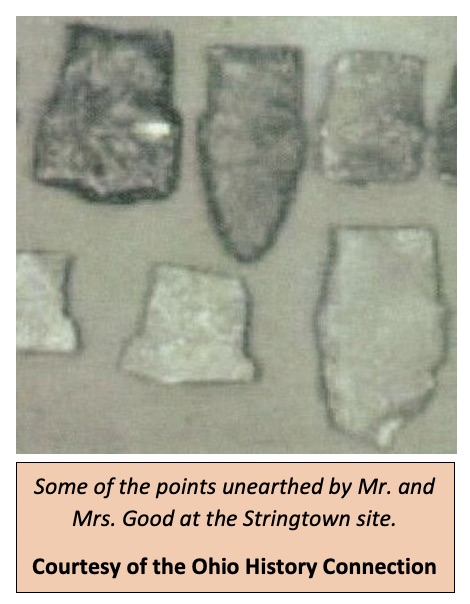 Good and his wife discovered over 250 artifacts identified as projectile points for spears.  Because of the large number of artifacts uncovered, the site was likely a popular campsite for these early people.

In an archeological journal article, the area is referenced as The Stringtown Site and the artifacts as Stringtown Points. That article was written by Mr. Good and Robert N. Converse of Plain City, an author of several books and the owner of an artifact auction company.

Both men, as well as Good’s wife, were active in the Archeological Society of Ohio and all served several terms as trustees for the organization.

Their discoveries are referred to in geological and archaeological circles as stemmed points.   People today would simply refer to the objects as spear heads that were used to hunt large game but their discovery was much more important.

The Stringtown collection was examined and acknowledged in 1963 by Dr. Olaf H. Prufer and Raymond S. Baby, better known in research circles as Prufer and Baby.  Martha A. Potter also researched the Good’s discoveries.  All had connections to the Ohio State University.

They also received correspondence from the Smithsonian Institute concerning the points but none of those documents are known to exist today. Richard L. (Ike) Stage recalled Mr. and Mrs. Good set aside a room in their home for what they called the Grove City Relic Museum in the 1970s.  It was open to the public and the subject of numerous newspaper articles.  They only asked that people would call in advance before coming to their home.  This was Grove City’s first museum.

Stage said he remembered they had a large collection of Indian arrow heads, some found along a former Native American trail from the Scioto.  There were several Shawnee villages along the Scioto River between Columbus and Chillicothe.  The Shawnee hunted wild game in Kentucky and Virginia.

Some of the artifacts in their home were in eight showcases.  One popular item was the tooth of a wooly Mammoth found in Florida.  Other items in their collection included crude stone tools, pottery, tomahawks, hammers, fish hooks, spears, rocks, minerals and early jewelry.

While most of their collection was from Ohio and Kentucky, other relics were provided by friends who lived in Arkansas, Missouri and Arizona.   Neither Mr. nor Mrs. Good had any formal training in archaeology.   He was a former president of the Archeological Society of Ohio and his wife served 12 years as a trustee of the organization.

“Often, objects that are left behind comprise all that we know of past societies. These objects are our window to the past,” according to the Ohio History Connection web posting.

Before Robinette’s effort, the only image of the site was one showing a large crowd surrounding the clay pit where the discovery was made.  A close look at the image indicates the animal’s tusks were a Mastodon. 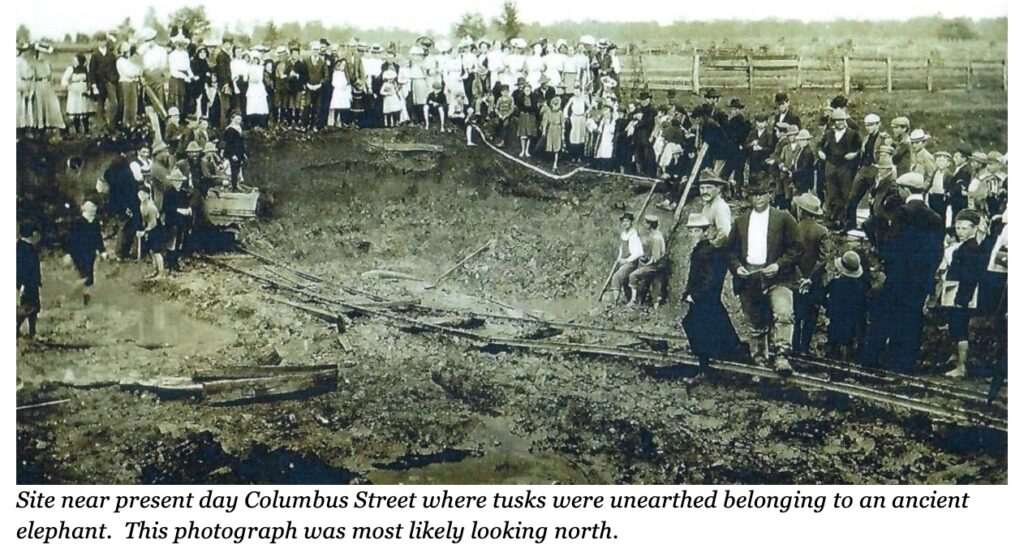 It’s interesting to speculate when the picture might have been taken.  Was it on a Sunday, possibly after a church service, based on the women’s attire as they stood above the pit area?

The newspaper article indicated the discovery was one of the largest collections of Mastodon bones ever uncovered in the area.  The property was owned by Grove City postmaster Edward Darnell. Darnell may have either been the owner or a manager at the brick and tile factory at the time.

Several workers were digging in a deep pit loading clay onto a rail cart when the bones were unearthed.

The tusks and other assorted bones were embedded in clay about 12 feet below ground level.  A professor, by the name of Orton, was contacted at the Ohio State University.  He apparently passed information to the OSU museum curator, a man by the name of Mills.  Along with a contingent of students, Mills visited the Grove City site and examined the tusks and bones while still in the ground.

Mills identified the remains as a Mastodon Americanus, an elephant like animal that lived here toward the end of the Ice Age.  Pictures from the Ohio History Connection files do create questions about the discovery.  Images of the animal’s tusks appear, at first glance, to be from different animals. 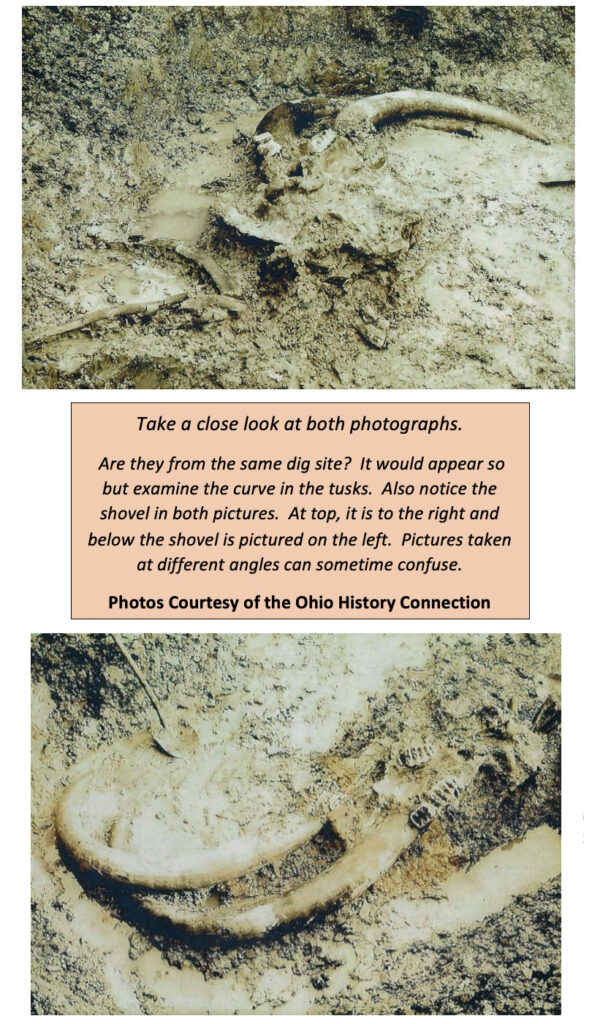 Were they Mastodon or a Mammoth bone?  The question presents itself because of the curvature of the tusks as shown in two different photographs.

Mastodon tusks have a very slight curve; Mammoth tusks have a very distinctive curve.  A close examination of both pictures clearly shows a shovel at the tip of the tusk which would imply all three photographs document a single animal from different viewpoints.  Readers must draw their own conclusion.

“Mills, who has exhumed many skeletons of extinct animals, expressed great surprise at finding the remains of so large an animal as this embedded in clay,” according to the Ohio State Journal newspaper article.  “They [bones] are almost invariably found in bogs, where the animal had mired and died.”

Of course, there’s another possibility.   Mr. and Mrs. Ernest Good, who once lived on Civic Drive in Grove City, were amateur archaeologists who discovered a unique type of spear points that dates to the time Mastodons roamed Central Ohio.  Since Grove City’s Mastodon wasn’t found in a bog, is it possible it had been hunted by the prehistoric Late Archaic Agepeople who had a settlement near Stringtown Road and State Route 104?

Over the years, there have been numerous theories as to where the bones were found.  One of the most frequently mentioned was a site behind St. John’s Lutheran Church.

“From what I was told growing up two pit areas existed,” according to Steve Jackson.  Both were on the north side of Columbus Street just east of the bend in the road.  One was north of the small stream that paralleled Columbus Street.   That clay pit became, in the 20th century, a town dumping spot.   “The second pit was just east of Orchard Lane, behind the houses that line Columbus Street where Haughn Road ends at Columbus Street,” he continued.

According to Grant lore, that’s where the bricks for the Grant-Sawyer Home were dug. One or two sources say the actual spot was about 1,000 feet east of that house, which would have been on the south side of the same run, which by that point has passed under Columbus Street.

“If I were guessing, I would think pit 1 might the most likely location for the group photograph,” Jackson said.

Most of Jackson’s comments come from overhearing conversations between his grandmother Grace Orders Jackson and a younger sister Florence Orders Peters as they cruised about Grove City in Aunt Florence’s big, green DeSoto.

“I was listening to every word from the back seat,” he said.

The skeleton and tusks were turned over to the Ohio State University’s museum and later transferred to the Ohio Historical Society, now known as the Ohio History Connection.   Efforts to trace the donation had been fraught until now.

The lingering question, “What happened to the Grove City Mastodon,” had no answer until now.  A handwritten notation on the newspaper clipping from the historical file reads: “From scrapbook bone disposed of by archives of O.H.C. 12/1902.” 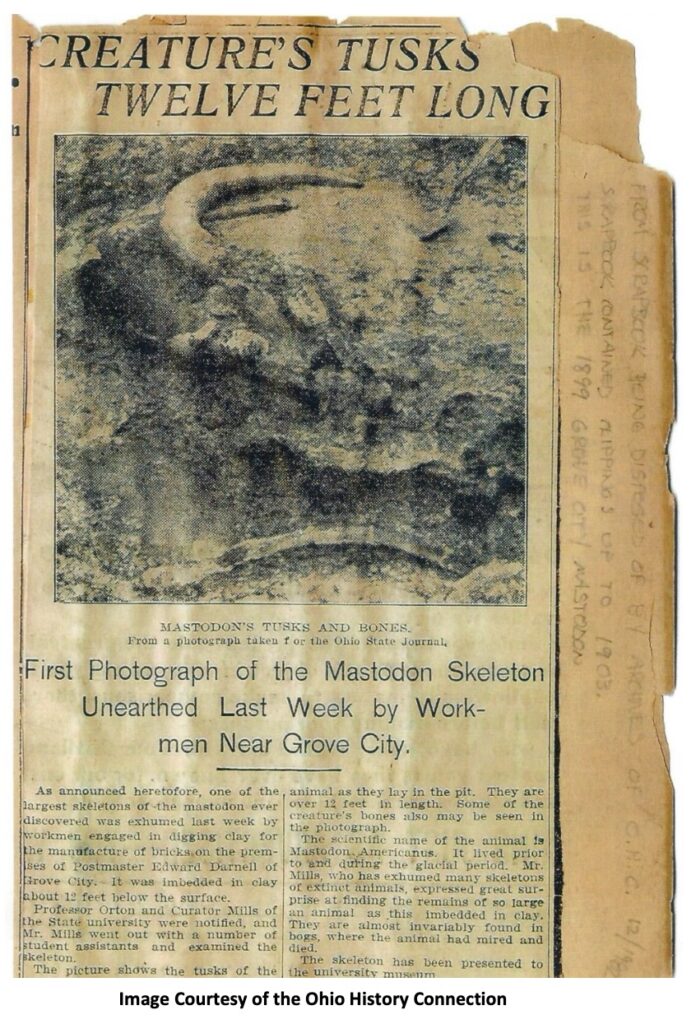