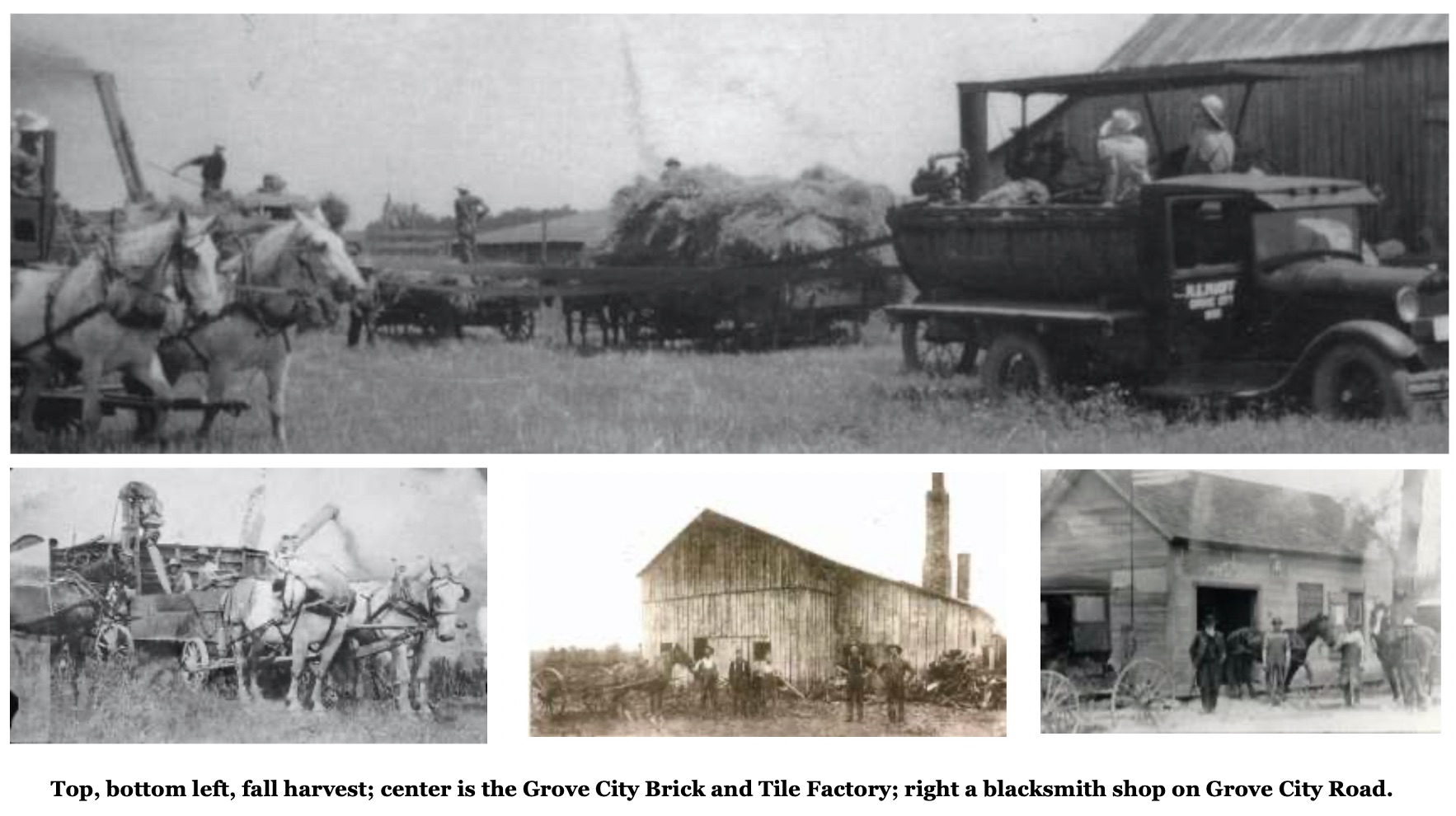 Grove City was once a farm community and a time when neighbors worked together to bring in the fall harvest. It wasn’t easy to be a farmer. The rich soil in the township was wet and many fields had to be drained into the various runs that emptied into the Scioto River. The first permanent white settlers arrived in 1803 but it wasn’t until 1852 that a successful businessman from Carroll, Ohio and three others created a plat naming a settlement in Jackson Township, Grove City. That man was William Foster Breck. The others included Jeremiah Smith, Breck’s brother-in-law, William Sibray, a brick mason and plasterer and George Weygandt, a carpenter.

Many histories state William F. Breck and his brother-in-law Jeremiah Smith purchased 15¼ acres of land from Hugh Grant Jr. but according to the 1846 History of Franklin and Pickaway County and other sources, that land was actually owned by Deacon John Smith, Breck’s father-in-law. 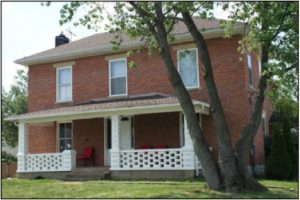 This was once the home of William F. Breck, founder of Grove City.

In 1847, Breck was still living in Carroll, Ohio and had been appointed the first postmaster of that village on Oct. 27, 1847, according to the U. S. Appointments of Postmasters. According to research by local historian Earl Nicholson, Breck began construction of a two story brick home in Grove City in 1848 on land he and his wife had obtained title to Oct. 8, 1847 from Breck’s father-in-law.

According to an old Columbus newspaper, Breck’s brick home was on the west side of what is now Broadway and was set back a “distance” from the turnpike. His porch had a clear view of the horse drawn buggies, wagons and coaches that passed by daily.

In 1852, Breck and others created a plat with 19 lots for a village on the original 15¼ acres of land on the east side of the Columbus and Harrisburg Turnpike. They made plans for the village in Breck’s home. Others involved in planning the village included Jeremiah Smith, William Sibray and George Weygandt.

March 5, 1866 was another important day in Grove City’s history. On that date, 37 early residents signed a petition and presented it to the Franklin County Commissioners and the State of Ohio seeking incorporation of the Village of Grove City.

The Columbus and Harrisburg Turnpike made this possible. Constructed in 1848-49 at a cost of $35,602, it opened Jackson Township and Grove City to new markets. That turnpike today is known as the 3-C Highway and U. S. Route 62.

Two other turnpikes opened a few years later. They included the Cottage Mills and Harrisburg Turnpike (today Rt. 665) built in 1852 that was seven and one-half miles long running from Shadeville to Harrisburg. The Franklin and Jackson Turnpike (Rt. 104), also built in 1852, ran 10 miles adjacent to the Scioto River from Columbus connecting with the Cottage Mills and Harrisburg Turnpike. It cost about $8,000 to build.

William F. Breck visited the western front of the township one year before the turnpike company was formed. The new road connected Columbus to Harrisburg. That road was later extended to Washington, Ohio, now known as Washington Court House.

Breck was born April 27, 1806 at Marietta, Washington County, Ohio on the Ohio River. Some accounts say he was born in Belpre which is about 15 miles downriver from Marietta. His father was John Breck and his mother, Mahalia Foster, was a decedent of the Ephraim Foster family of Dover, Massachusetts.

He was described, by local historian Harold Windsor, as being medium height, muscular, well proportioned, quick and active in his movements and standing erect. Breck had a broad and high forehead, blue gray eyes, a firm mouth and a square chin and an aquiline nose with a prominent bridge giving it the appearance of being curved or slightly bent.

Breck, at the age of 16, is reported to have worked as a merchant in Carroll, a small town in Fairfield County. According to a Genealogy of the Breck Family, William left Carroll and lived for a time in Newport, New Hampshire with another uncle, James Breck. While there, he was a merchant apprentice learning more about the trade from his uncle. 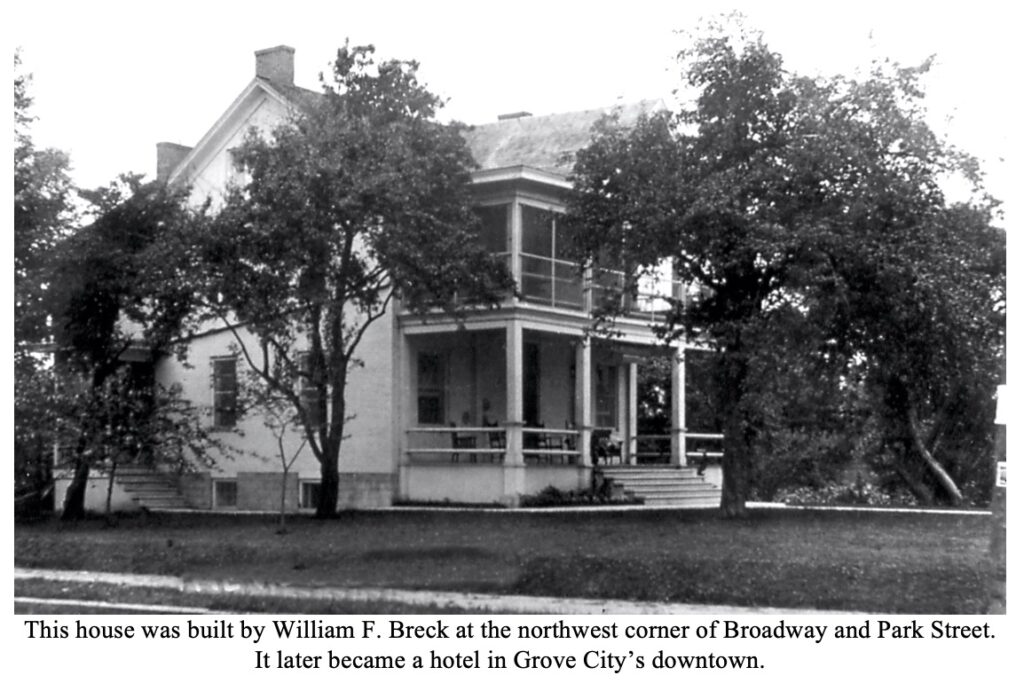 Sometime before age 19, William returned to Carroll where he became a prosperous merchant with the help of his Uncle Frederic, a merchant and trader. Breck would eventually own not only a grist mill but also a hotel and general store in Carroll before relocating to Grove City.

William was 24 years old when he married Elizabeth Campbell Smith, 21, on Jan. 1, 1840 in her hometown of Worthington. After their wedding, Elizabeth moved to William’s home at Carroll. Elizabeth’s father was Deacon John Smith and her mother was Olive Wilson Smith from Cooperstown, New York. They were parents of six children.

Her father owned 273 acres in Jackson Township including the 15¼ acres where Breck created his new town of Grove City. In 1847, Breck and Elizabeth purchased 273 acres from her father for $1,911.

Breck’s first business was to purchase and relocate a grist mill that was located about two miles west of Grove City. He removed the power plant and stones to the village. Breck would eventually operate numerous businesses including a brick and tile factory and was named Grove City’s first postmaster.

Most of the brick for these early homes was made from clay soil near the construction site. Bricks were formed by hand, then dipped in water and allowed to dry and harden in the sun, according to a 1932 article by Harold Windsor. Many interiors of the older homes were finished in walnut and oak. 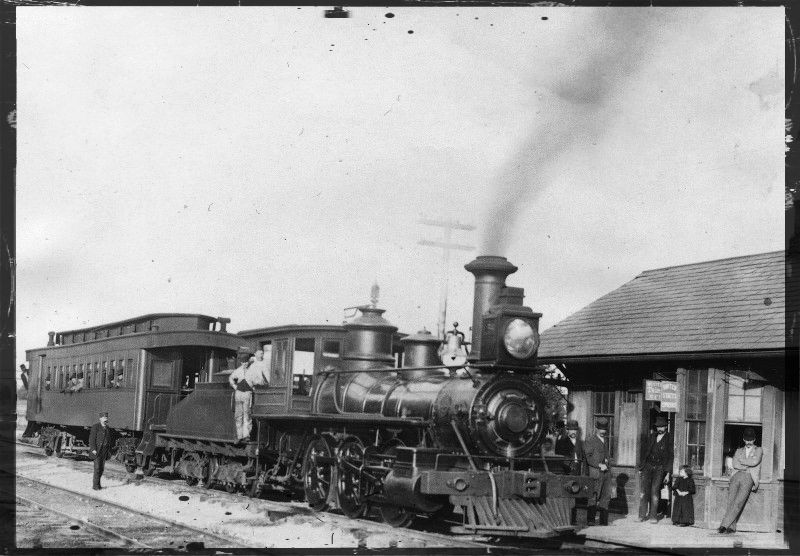 A commuter train ran for a brief period in the late 1800s between Columbus and Grove City. It provided transportation for many local residents who worked at the Columbus Buggy Works, the largest buggy manufacturer in the world at the time.

The Columbus and Harrisburg Turnpike, completed in 1849, allowed Jackson Township residents easier access to Columbus and Harrisburg. Before that road through Grove City opened, Breck was taking full advantage of the first mass transportation route in the state, the Ohio and Erie Canal. The canal, even though it didn’t intersect with Grove City, it did impact local farmers. A feeder canal at Shadeville and the Scioto River gave farmers and businesses access to the new trade route.

It’s not known exactly when stage coaches first ran through Jackson Township but they made their way in several directions. The best known stage coach stop in the area became Plank’s On Broadway. That business, established about the same time the town was established, was a popular stopping point between Columbus and Cincinnati. Another stop was the Schoch house located at Big Run and Holt Road. This route connected Columbus and London, Ohio. Another is believed to have been on Jackson Pike near present day Stringtown Road.

The coaches were horse drawn vehicles that carried not only passengers but also mail and some freight. Most fares were about six cents a mile. The stage stops were also known as taverns and were gathering places for locals. Patrons could get a warm beer and sandwich for a nickel. Stage coaches and later trains captured the passenger service that once rode on canal boats.

An Interurban operator stands on top of his traction car to change electric service for a new direction of travel.

The Cincinnati, Midland and Columbus Railroad completed construction of a new rail line and the Grove City Depot in 1884. Competition for passengers and freight was underway. The arrival of the railroad encouraged farmers to produce more crops because they could now be easily shipped to markets outside Central Ohio. About 10 years later in 1894, a daily commuter steam powered engine and passenger car ran between Columbus and Grove City. Housed in Grove City, its sole responsibility was to transport workers to the Columbus Buggy Works. The commuter rail service ended in 1898 when the Interurban began operation.

In 1898, Adam Grant had completed construction of an Interurban line better known as the Grove City and Greenlawn Street Railway. This was his second attempt to run service that would connect Columbus and Grove City; the first effort known as the Columbus and Harrisburg Electric Street Railway was never started when Grant found out about reckless spending. The initial run was made Oct. 31, 1898. Grant had hoped to have the line in service in time for the Grove City Fair which was held beginning Oct. 4. Grant’s new line between Greenlawn Cemetery, where it connected with the Columbus railway, and Grove City, a total of six miles. Grant’s company had three motor cars and six trailers for passengers, mail and freight. 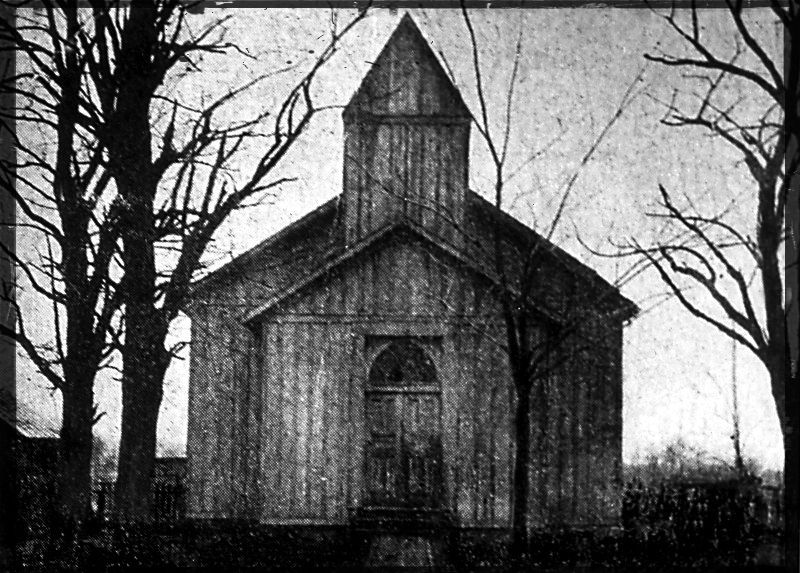 This photo was the old Lutheran Church, located at the northeast corner of Columbus Street and Arbutus Avenue, in 1853. The church was constructed by George Weygandt and still stands today with a modified outward appearance. The building served two Lutheran fellowships for 35 years.

On Sept. 5, 1846, Gabriel Diemer and his wife Elizabeth sold a parcel of land, covering about one acre, for the sum of one dollar to Daniel Smith and Hugh Grant Jr., trustees of the Highland Road Free Meeting House. A primitive meeting house with crude log walls was built on the property by early settlers. The building is believed to have been on the east side of the Columbus and Harrisburg Turnpike near present day Kingston Avenue. The first religious services in the immediate area were held at the old mission.

A primary provision in that property transfer was a statement that the premises “shall be kept upon this condition, that there shall be kept thereon a suitable house for the public worship of God, which shall be kept equally free to all white denominations of Christians. The deed wasn’t recorded Sept. 11, 1847. The word “white” was removed during the Civil War era.

The History of Franklin and Pickaway Counties, published in 1880, states the Rev. R. K. Davis was the first minister to preach at the old Mission. Davis, according to the book, was a Protestant Methodist minister; other accounts claim he was a Presbyterian pastor. Davis, a friend of Breck, came to Jackson Township from Fairfield County in 1846 with Breck. The Lutheran, Presbyterian and Methodist church congregations formed out of the Highland Mission. 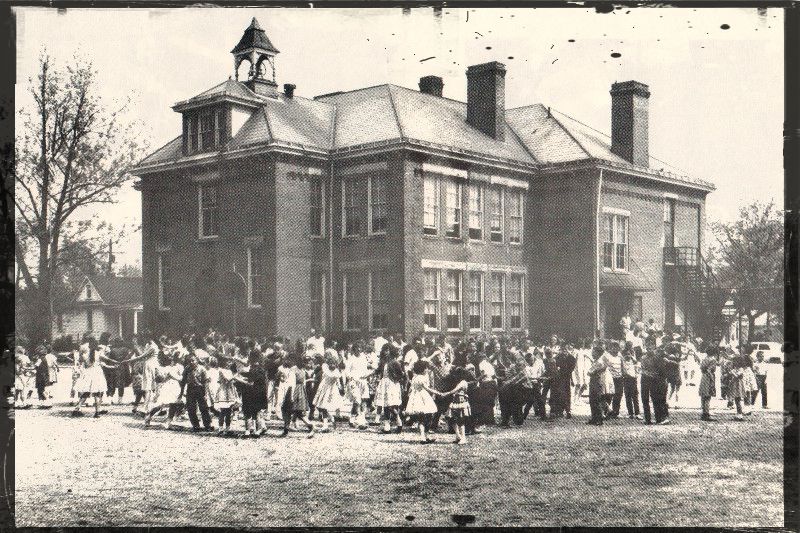 This article and information was compiled and written by James F. Hale from historical records of the Southwest Franklin County Historical Society in 2014.