Scroll beyond the video for more Beulah Park history!

Beulah Park Highlights Video: This video highlights the closing ceremony and the final days of operation of Beulah Park. Video courtesy of the City of Grove City, Ohio and video editing by Derek Bowshier. 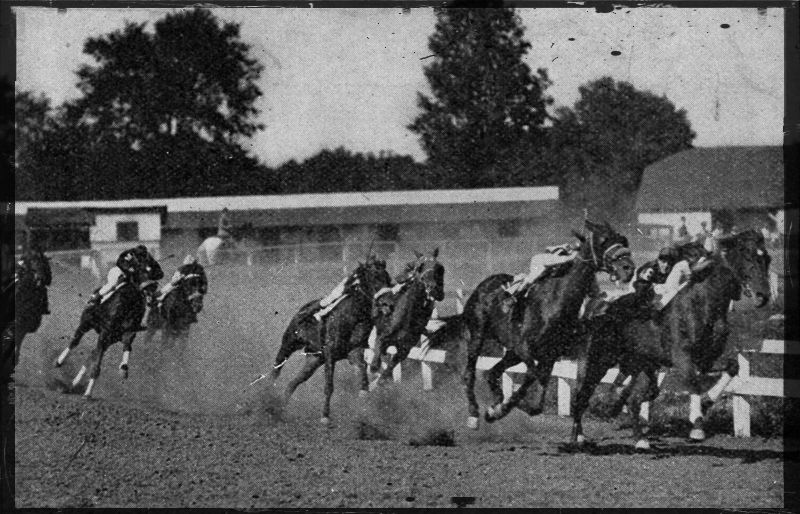 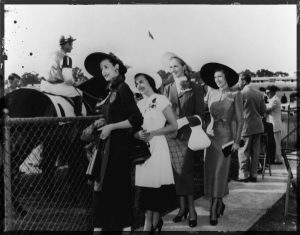 Adam Grant created Beulah Park in 1889 as a community gathering place when he built single family homes in what is known as the Beulah Addition, just west of the railroad tracks in the Grove City Town Center.

The park was named in honor of his daughter, Beulah. One of the early attractions was a merry- go-round powered by John Buckholtz’s steam engine. Beulah Park was also once home to the Franklin County Fair and later the Grove City Fair.

Thoroughbred racing came to Grove City in 1923 when a half mile dirt track opened. It became a major entertainment center in Central Ohio spurred on by the Interurban electric street railway that brought race fans from Columbus and beyond. The track operated as Beulah Park except for a few years when a new owner changed the name to Darby Downs. That name was never popular with race fans.

It was not unusual for the population of Grove City to double and sometimes triple in size with race fans attending afternoon racing at Beulah Park and night races at the Greyhound track.

Residents turned their yards into parking lots especially along Grant Avenue and Park Street. The closer a race fan could park near the Grant Avenue entrance, the higher the fee to park. Gasoline stations in Grove City could identify winners and losers by the amount of fuel purchased. Losers would often purchase as little as 25-50 cents worth of gas, just enough to get home. 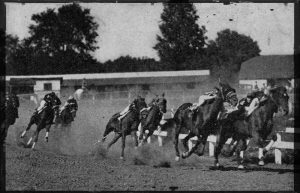 Thoroughbreds round a corner at Beulah Park.

The popularity of thoroughbred racing began to decline with a more varied option of entertainment venues. Just before Beulah Park closed it had become a very popular track for race wagering in England, according to Jim McKinney, the track’s last general manager.

Beulah Park was purchased in 2011 by Penn National Gaming and shortly afterwards announced it would move the racing license to a race facility outside Franklin County. The track and its grounds were no longer available for numerous city sponsored activities such as the balloon festival, country music shows and Independence Day fireworks. Beulah had also been home to high school graduation programs, the Capitol City Music Park, Big Bear Balloon Festival and the Grove City Community Fair and a staging point for the Arts in the Alley Parade. 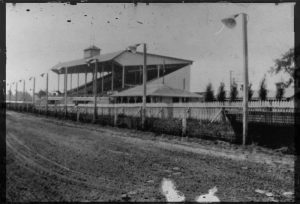 Grove City was also first in Ohio for greyhound racing. The stadium was located where OLPH School stands today.

The Grove City High School Greyhounds are the only remaining evidence there was once a Greyhound race track in Grove City. Construction started in the spring of 1926. It opened and ran its first race in August and, just 43 race days later, in October, the track closed for the season because of inclement weather. The track was a big hit in 1927, but toward the end of the year crowds and betting began to fall off amid a storm of protests about racing regulation. The track shut down the end of that year.

the track was revived by a group of businessmen but they weren’t successful. It was around that time the businessmen, hoping to gain public support, approached Grove City High School’s athletic department urging the team assume the name the Greyhounds. Financial support was offered to the school in an effort to promote Greyhound racing, but the new name for the Grove City High School Greyhounds sports team couldn’t deliver. It didn’t breathe new life into the operation of the race track. Greyhound racing officially shut down in 1932 largely because a new state law legalized horse racing in Ohio but made no mention about Greyhound racing.

Bob Dienst, the principal owner at Beulah Park and a stock holder in the Greyhound track, assumed the $200,000 mortgage on the Greyhound property in 1935 and became the sole owner after purchasing the ground for one-twelfth of the outstanding mortgage. For years after the facility closed, neighborhood children used it as a playground. The site today is a Catholic school.

Local Artist David Lane, supported by funding from the Grove City Historical Commission, created a mural honoring Greyhound racing in 2014. It can be seen on Park Street at Broadway.