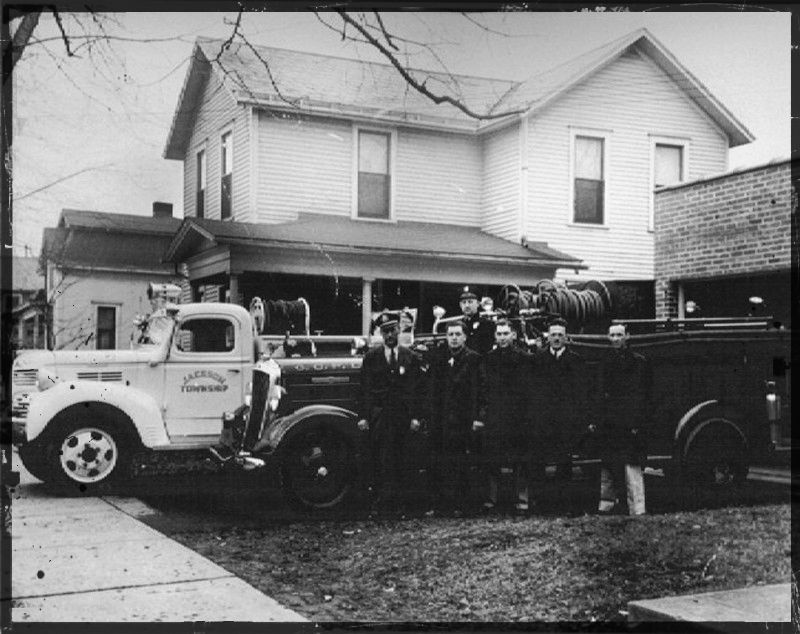 Grove City and Jackson Township once operated separate fire departments but utilized the same volunteers and the same garage. The white truck was the township’s vehicle.

Franklin County was paying bounties for wolf and squirrel hides because the animals were grossly overpopulated. The area also had a large population of wild hogs, buffalo, elk, deer, wild turkey, bear and panthers.

The land was flat and fertile but damp and not suitable for farming. To create a productive farming environment, many acres had to be drained into the natural runs which carried runoff to the Scioto River. Farmers laid clay tile, manufactured in the township, to drain land intended for crops. Much of the area was a forest that included walnut, oak, sycamore, maple, beech, chestnut, and tulip trees. There were also many smaller varieties of trees including dogwood, wild plum, crab apple, redbud and pawpaw. Grapevines hung from many towering trees and the undergrowth had an abundance of blueberry bushes and raspberry vines.

Jackson Township, when organized, was considered the “backwoods township” in Franklin County. Many early settlers were of German descent moving here from Pennsylvania. Others came from Virginia and Kentucky traveling on foot, horseback, ox cart or wagon.

Hugh Grant Sr. was the first white person to permanently settle in southern Franklin County in 1805, three years after Ohio became a state. Grant had been a successful businessman operating a gristmill in Pittsburgh. His Pennsylvania mill was located on a 187 acre tract on a small stream that flowed through the city to the Monongahela River. Competition was eating away at his profits which motivated him to relocate into new virgin territory.

Once a year, he would place his surplus goods on a freight barge, known as a broadhorn, and float down the Ohio River to the Mississippi River and into New Orleans.

There he would sell his goods then dismantle the broadhorn and sell its lumber and head for home. There is no real evidence how he returned but he likely followed the rivers north.

Around 1796 or 1797, Grant diverted from his normal route home and headed north following the Scioto River into a wilderness area that would later become Ohio. It was about the same time Lucas Sullivant established Franklinton in 1796. Franklinton was the first permanent white settlement in the Scioto Valley north of Chillicothe.

Grant fell in love with the rich soil and natural beauty of the area and became determined to move his family from Pennsylvania to the newly discovered wilderness. Grant made the journey from Pittsburgh in 1804 with his wife, Catherine, and five children, Alexander (1792), Jacob (1794), Isabella (1796), Nancy (1799), and Mary (1804). Hugh Jr. was born June 30, 1807 in Jackson Township. Historical accounts state they traveled with an ox cart. Unable to readily identify the land he had purchased, the family became temporary squatters on the banks of the Scioto River.

Catherine Grant eventually identified the family’s land and moved the family from the Scioto River where she saw the construction of a cabin. The Grant homestead at Haughn Road and Park Street was built around 1840, about 35 years after the family arrived in Central Ohio. 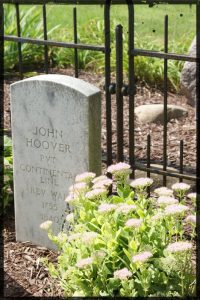 Burial place for John Hoover on Gantz Road. He was a Revolutionary soldier.

Traveling from Harrisburg to Grove City, everyone traveling the Harrisburg Columbus Turnpike had to stop in Pleasant Corners to pay a toll. Now no more than a crossroads south of Grove City at SR 665, the community was once larger than Grove City.

Although now located in Hamilton Township, Shadeville was once part of Franklin Township. It played a key role before 1870 in the development of Jackson Township (which was also created out of Franklin Township). The settlement that would become Shadeville was best known to many as Cottage Mills. Cottage Mills wasn’t a town; it was a business that operated as Cottage & Mills, a grist mill located at present day SR 665 and US Rt. 23.

Captain Adin G. Hibbs came to the area from Pennsylvania in 1832 and he is credited with creation of the village plat for Shadeville. People who lived in the area at the time identified so much with the business that they included Cottage Mills as a return address on correspondence.

Information about the mill was uncovered in an insurance policy issued by The North Western Insurance Company of Oswego, New York dated Feb. 4, 1864. The policy was in the possession of Louie and Joan Eyerman. The policy provided $2,000 coverage for the stock of wheat contained in a three story grain tower on the premises of “Cottage & Mills”. Coverage was also in place for the contents of a one story warehouse that was located 18 feet east of the mill. A provision in the policy allowed the insured, Hughes and Rockefeller, to qualify for an additional $7,000 insurance if needed. The policy, which cost $15, lists the insured premises as the Shadeville Mill.

A feeder canal ran from the mill to Groveport where it connected with the Ohio-Erie Canal. That was the principal means to ship grain and other goods to markets both north and south. Jackson Township resident Grace Orders is quoted as saying wagons filled with grain would back-up for more than a half mile waiting to cross the bridge (now SR 665) over the Scioto River. 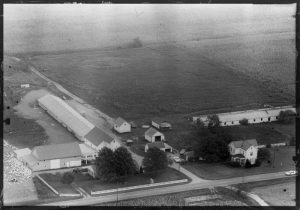 Grove City was platted in 1852 as a settlement on a new turnpike that ran from Columbus to Harrisburg. The land for the settlement had been purchased by William Foster Breck who is considered the founder of Grove City.

Breck purchased 15 1/4 acres from his father-in-law and later purchased another 300 acres to farm that was west of the turnpike, today known as Broadway.

Urbancrest is an incorporated village located just north of Grove City. The community, originally a settlement of African Americans, today is a racially mixed area. The village, platted Nov. 1, 1890, included approximately 100 acres. At that time, the village had a population of 30 people. Residents petitioned to be an incorporated village in 1948 and Eugene Seabury was appointed the first mayor. Hannibal Johnson was the first person elected mayor. 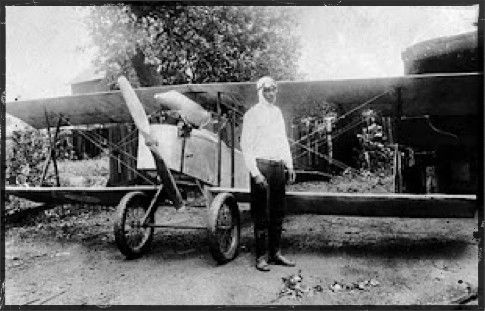 Lonnie Carmen with his airplane.

One of the village’s most interesting residents was Lonnie Carmen, a mechanic and inventor. He loved flight. Unable to purchase his own airplane in 1926, he built one in his backyard in Urbancrest with a salvaged motorcycle engine. He had no written plans but was able to construct an airplane that flew. Where he took off is unknown but accounts recall he feared vandals would damage his aircraft so he hid it inside a barn on his property when not in use.

By the 1930s, Lonnie had purchased his own Piper Cub and every Saturday, weather permitting, he took his family in his Franklin motor car to a nearby airport for rides in his airplane. Lonnie, on Sundays, headed for Port Columbus (now John Glenn International Airport) to watch planes take off and land. He was known as a family man. He and his wife Anna raised a family in the village.

He was noted as a man who was able to solve most mechanical problems and according to Arnett Howard, Lonnie was the first black aviator in Columbus. 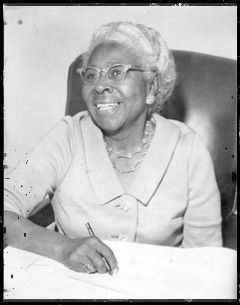 The most well know resident of the village was Ellen Craig, who in 1971, was the first African-American female elected to the office of mayor in the United States. She won the election by only 11 votes resulting in a recount. The election results were confirmed. She served as mayor four years from 1972-1975.

She was born June 5, 1906, in Franklin County, Ohio. While only 20 years old, Craig appeared before the Franklin County Commissioners seeking support for municipal water service for the village. She was not successful but in 1960, as council member, she and Mayor William Johnson went to Chicago seeking help for water and sewer service. In 1970, working closely with U. S. Congressman Chalmers P. Wylie, her dream became a reality. Urbancrest would get the much needed service. She also sought to improve the community with new housing, street lights and signage and attention to the street improvements. She received 80 to 100 significant awards and honors.

Another famous member of the community was the Rev. Dr. Nelson Wesley Trout who grew up in Urbancrest and graduated from Grove City High School in 1939. 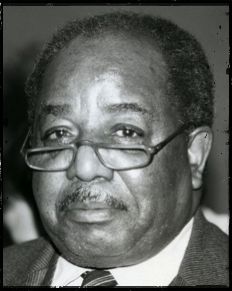 Trout was the first African American elected bishop to serve the American Lutheran Church. This parish included the 144,000 member South Pacific District which included seven Western states. Before becoming a bishop, he was a professor and director of minority ministry studies at Trinity Lutheran Seminary in Columbus. Trout’s niece was famed jazz singer, Nancy Wilson.

Gary Burley of Urbancrest, an alumnus of the University of Pittsburgh and a graduate of Brookpark Middle School and Grove City High School, played professional football for the Cincinnati Bengals and Atlanta Falcons. He also played in Super Bowl XVI. After his professional football career, Burley worked with gifted and talented middle and high school athletes across the United States.

Another outstanding athlete was Bob Hitchens, also a resident of Urbancrest and a graduate of Grove City High School. He received honors as a tailback in the Mid-America Conference while attending Miami University. He was also honored as most valuable player, the offensive player of the year and named All-American by the Associated Press. He played professional football with the New England Patriots, Kansas City Chiefs and the Pittsburgh Steelers. He has been inducted into the Miami University Hall of Fame. 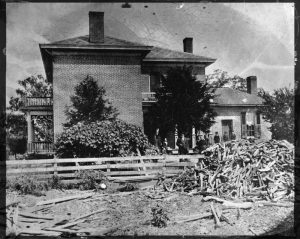 Borror’s Corners is located at the intersection of what we know today as State Routes 104 and 665. SR 665 was once identified as London-Shadeville Free Pike. According to early plat maps, there was a river crossing point of the Scioto River just south of the settlement.

The first school in Jackson Township opened in 1815, the same year the township was created. The school was a subscription school on land owned by Solomon Borror. Families supported the teacher with money, supplies or room and board.

Most of the 20 students were from the Borror, Miller, Seeds, Fishel and Fitzgerald families. The first store in Jackson Township was started by Absolom Borror. Many blacksmiths also settled in the immediate area. The first church in Jackson Township opened at Borror’s Corner in the home of William Miller in 1812.