Brothers Thomas and Elijah Chenoweth of Maryland were the first settlers in what would become Pleasant Township. They had first moved from their home state of Maryland to Pike County. While in Pike County, they purchased 200 acres in 1799 from Lucas Sullivant at Franklinton. The built log cabins near Big Darby Creek. 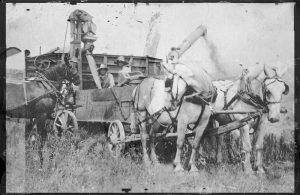 Most businesses in Pleasant Township were linked to farming; other occupations included blacksmith, carpenters, broom maker and lumber dealer. There were also several grocery stores in the township.

Early settlers found the township was a prairie with rich soil but the land had to be tiled and drained to allow farming. The population of Pleasant Township in 1840 was over 800 and by 1908 the population has grown to 2,355.

There was another settlement in the township so named Chenoweth Mills after a large grain and flour business operated by Thomas Chenoweth.

Darbydale, once known as Little Pennsylvania, had not been settled when Pleasant Township was formed. There were two mills close to the area which encouraged the settlement. One grist mill located on Darby Creek was Dyer’s Mill near Georgesville. Chenoweth’s Mill was just a short distance from where the village would be settled. In the 1950s, residents petitioned that the village name be changed to Darbydale.

The settlement once had a one room schoolhouse that was part of the Pennsylvania School District in Pleasant Township. It was the focal point of the community. The school opened in 1838 and closed in 1939 after 101 years of continuous service. Mina Rider was the last teacher at the school. The original building was a log structure and was replaced with another one room schoolhouse that was painted white. The third school was constructed of brick. When the school closed, students transferred to Harrisburg. 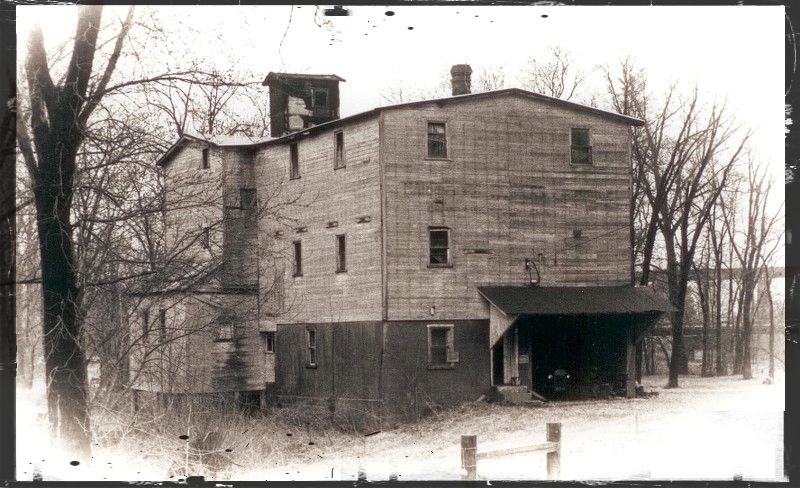 Darbydale is known today as an Internet destination. The community cemetery is known by many as Woolybooger Cemetery. It’s located on the north side of London-Groveport Road not far from Trapper John’s Canoe Livery. According to legend, the cemetery is supposed to be haunted and a Bigfoot like creature called the “Woolybooger” lives there.

Back in 1974, the mayor of Darbydale, John W. Kell, became a well known individual throughout Ohio. Tired of seeing the same people in mayor’s court, Kell was game for something different. Instead of jail or a fine, Kell ordered people to church. Over a five year period, Kell placed more than 50 people on probation with the condition that they attend a church of their choice for a court ordered period of time. Many went on to seek personal counseling.

One pastor complained about having to deal with the “criminal element” in church. Kell asked the pastor if the membership of his church was Christian. The pastor replied “yes”. Kell then said it was his understanding the church was established to preach to sinners. The pastor hung up the phone.

The village continued to operate until 1985 when political strife caused residents to vote against local government in favor of Pleasant Township. 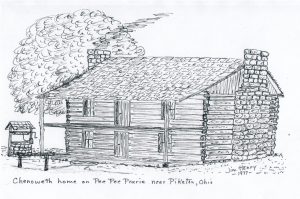 Four years after the Elijah and Rachel Chenoweth family arrived in Pike County, the couple and two sons moved, in 1799, to what is now the Pleasant Township area of Franklin County. Elijah was 37 years old when he moved his young family north.

After several years in small cabins, a larger log cabin was built about a half mile north of the village on the road to Darbydale. The house was located in a low area and was constructed in 1806. It eventually evolved into a 14-room home.

Thirty-seven years after Elijah and Rachel moved to Pleasant Township, a son, Joseph Chenoweth hired Frederick Cole to survey the boundary lines in 1836 and plat the settlement of Harrisburgh. (The village wasn’t incorporated until 1851). According to a story by Pat Wilson in the Aug. 10, 1967 edition of the Grove City Record the village was situated at the intersection of the Harrisburg Columbus Pike (also known as the Highland Road) and Circleville Road. 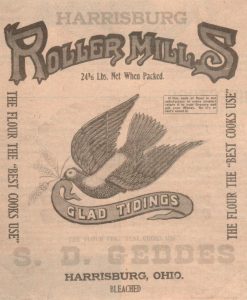 At the time, the settlement was known as Darby Cross Roads. Still others referred to the community as Mudsock*. The last “h” was removed from the village name in 1893 thus creating the Village of Harrisburg. Harrisburgh was part of the Virginia Military Grant made to Nicholas Massenburgh in 1796 for his service in the American Revolution. It was later purchased by Lucas Sullivant, the man who settled and created the town of Franklinton.

Joseph married Margaret Heath of Pickaway County and they had nine children including Rachel, Jane, Elijah, Joseph, Sarah, William, Elizabeth, Isabella, and Jerry. Margaret’s husband had become a wealthy businessman who frequently traveled in a wagon to Baltimore where he purchased goods that were in high demand in Franklin, Pickaway and Ross Counties. He also ran a trade route between Chillicothe and Franklinton.

Joseph also bought and sold large numbers of livestock, according to the History of Franklin and Pickaway Counties. His land holdings totaled 1,600 acres.

Harrisburg and Grove City were connected by the Harrisburg Columbus Pike (Rt. 62) which was a toll road at the time. A toll gate was located at what is today the crossroads of Rt. 665 and Rt. 62. 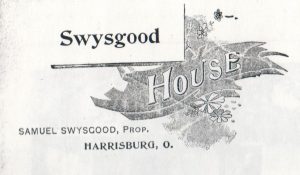 At one time, there were three hotels in the community. One of those was the Swysgood House. Samuel Swysgood, born in 1826, besides being the hotel-saloon operator, was also a village marshall in 1854.

*There is an account written by Steve Stephens published in the NeighborNews on Dec. 18, 1985, that would dispute that Mudsock was part of Harrisburg. He writes that Mudsock was a ‘dot on the Rand McNally road Atlas’ that was located at the corner of Roberts and Alton-Darby Creek Roads. He went on to write that a farmer, walking a muddy field, lost his boots and was left to walk home in his socks. That’s where the name originated.

Settlers moved into what would later become Georgesville shortly after Franklin County was created. It soon became the earliest settlement in Pleasant Township. Dyer’s Mill was an early settlement around 1805 that spurred growth along the creek that lead to a new settlement on the east bank of the creek that would eventually become Georgesville.   Thomas Roberts was postmaster for the Pleasant Post Office which was located in his home.   He is also credited with creating a plat for the town of Georgesville in 1816.

In 1818, the Pleasant Post Office became the Georgesville Post Office with Roberts serving as postmaster until 1851. Samuel Dyer erected a mill in the settlement around 1805 and it was known as Dyer’s Mill. There was a stage coach stop at a tavern. There were three large fireplaces and the tavern keeper would rake hot coals from the fire and cook a meal right on the hearth. The bar was a small closet which had a small barred window where drinks were sold.

Early settlers were John Bigger, James Gardiner, Samuel Kerr, John Turner, Roberts and Dyer. According to an old newspaper clipping, the town was named Georgesville because of a number of men living there named George. The men included George Spencer, George Osborn, George Lambert and George Sullivant. It is also told that Wyandot Indians joined the white settlers every six weeks for worship services when the circuit rider ministered to the congregation.

Miller’s Station was a small settlement in southern Jackson Township until the mid-1920s. It was also a boarding point for the Grove City Electric Interurban that ran between Columbus and Morgan (Orient). Interurban passengers arriving at Miller’s Station would board their horses at Edward and Mable Lambert Miller’s farm who were Genevieve Miller Sheets parents.

Genevieve Miller Sheets said her grandparents, Charles C. Miller (1854-1939) and Wilhelmina Kropp Miller (1856-1926), gave the land allowing the Interurban tracks to be placed on their property. Miller Station was located on the south side of Lambert Road at the corner of Lambert Road and the 3-C Highway (SR 62).

Sadie Dearth ran the diner at Miller Station. She lived in the old school house. Her original home was in southern Ohio. Sadie raised two girls, Janet and Marleen. The grocery store was built by Harry and Mabel Eitel, who had one daughter, Virginia. She married Dick Wills and they had two sons, Stacey and Richard. In 1961, Dick and Virginia Wills branched out from the grocery and service station business creating a towing service. Stacey now runs the Eitel’s towing business located just south of that intersection at the corner of Stahl Road and SR 62. 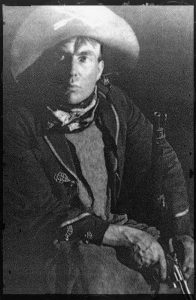 John B. Whitehawk, a Cherokee Indian and Army scout who lived just south of Grove City.

The school teacher, Alma Hayes, lived in Derby where Genevieve went to school for seven years. When Genevieve was ready to enter the eighth grade, she would have been the only student at that grade level so instead she transferred to the Harrisburg School.

Other residents included a Cherokee family of eight. They were the only Native Americans living in Jackson Township at the time, according to Paul Grossman, a local historian. Chief John B. Whitehawk (Ce-Tan-Ska) was an Army scout and interpreter for nine years also serving during the Indian Wars of 1892-1894.

Born in North Carolina, after leaving the Army, he settled in Central Ohio. He was a medicine man and he continued that practice bottling and selling home grown herbs and medicinal concoctions. Mrs. Mabel Miller was a friend of the family and their children played together. Whitehawk died in 1930 while his daughter, Rose, was a student at the old Park Street School in Grove City. Grossman described the family has having jet black hair, fine facial features and a copper complexion.